Lizzie and Jack are my personal heroes in the midst of this Corona virus apocalypse. As a midwife, Lizzie fights the virus in the hospital and reassures mothers that everything will be OK, in a moment when loved ones need to stay away and hospital visits are extremely limited. Jack is a researcher at OHSU working directly to develop a vaccine to stop the virus. They are brave, calm and intelligent, exactly the people you would like to be in charge of these huge responsibilities. 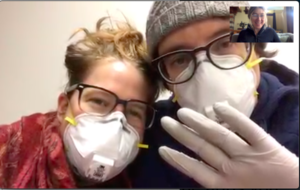 In the middle of all this chaos, they just completed the purchase of their first home in Portland, where they settled about a year ago. I have been the lucky one that got to know them and love them, as we worked together to find a dream home and jump the hoops of the transaction.

I find myself one more time being thankful for my job, which allows me to meet and work with such an inspiring couple as Lizzie and Jack. You guys really make a difference in the world.

Buying a home in a global pandemic amidst national social upheaval with record low levels of...

Julia and Kevin were looking to graduate from their rented apartment and make roots here in...